In a bid to increase sales and reduce food waste, more convenience stores and Japanese supermarkets are letting artificial intelligence analyze data such as past sales figures to decide what discounts to apply to products. perishable.

Around 3 p.m., at a branch of the Lawson convenience store chain in Tokyo’s Shinjuku district, an in-store computer decides which food items should be reduced and by how much. One display read “assorted sandwiches, one, 20 yen ($0.13) off”, another, “crispy ham and lettuce sandwiches, three, 30 yen off”.

Price tags with AI-calculated discounts are applied to sandwiches at a branch of the Lawson convenience store in Tokyo’s Shinjuku district on September 7, 2022. (Kyodo)

A manager then printed out price tags and went around, affixing them to the products. Eight assorted sandwiches were lined up on the shelf, but only one, approaching its shelf life, was on sale.

In 2015, Lawson Inc., one of Japan’s largest convenience store chains, introduced a system in which AI at its headquarters advises store managers and experienced staff on product management in all The stores.

To calculate how far to drop prices, the software takes into account a store’s sales, delivery times and local weather conditions to come up with a price that gives the product the best chance of selling.

Until now, store managers discounted based on experience, but leaving it to human judgment resulted in instances of undiscounted stock being wasted or items being sold. To limit this, the AI ​​examines some 270 product types four times a day.

The system has improved the group’s commercial performance. In 2021, in the six prefectures of the Tohoku region in northeastern Japan, the gross margin per store increased by 0.6%, while the cost of wasted products fell by 2.5% . 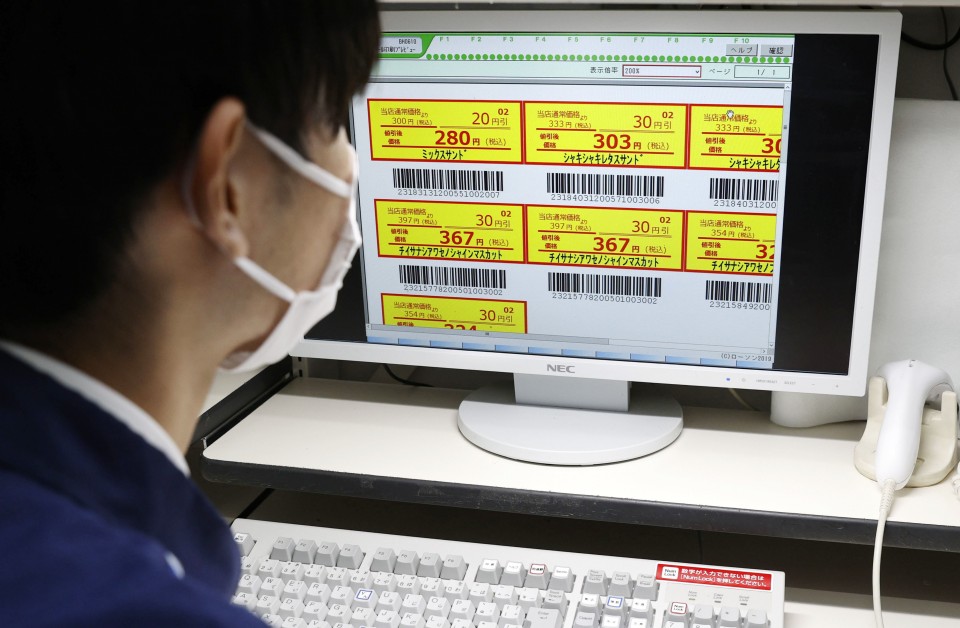 The manager of a branch of the Lawson convenience store in Tokyo’s Shinjuku district prints stickers with AI-calculated discount prices on September 7, 2022. (Kyodo)

It has since grown further, with 162 Lawson outlets in the capital adopting the system between June and September this year. The company intends to begin a full national rollout in fiscal year 2023.

Major supermarket chain Aeon Retail Co. also developed an AI discount system that was implemented in around 350 stores by the end of September. The system analyzes the sales performance of each store and sets the price of products prepared in store at a level that guarantees that they are sold before closing time.

At Aeon’s Funabashi branch in Chiba Prefecture, staff use a handheld device to scan barcodes of items remaining on deli shelves at 5 p.m. each day. When a university student who works there part-time checked the 200 yen Japanese-style rolled omelet, the device showed “18” – meaning that at 5 p.m., if there are 18 omelets left, they will be probably sold out by 11 p.m. closing time.

There were 24 omelets on the shelf at the time, so the employee entered “24 omelets” and sent the data to the centralized system. He instantly calculated an overall 10% discount for the omelets and spread out the 180 yen price tags.

The system’s introduction appears to have been a welcome addition, with an Aeon Retail manager praising it for “ending the practice of having to make huge discounts just before closing time”.